Effects of a leadership program for Latin American subsidiaries of a European transnational corporation. An experience report by Gerhard Liska and Nils Diederichsen

This case study describes the challenge to design a leadership development program for leaders and potential leaders of the Mexican and Chilean sites of a European-based transnational corporation. It describes how a leadership development program for participants from the Mexican and the Chilean sites of a European based enterprise creates impact. The program encourages and supports participants to make the transition from a more locally oriented leadership style (El Patron) to a more globally and team-oriented leadership style (El Líder Moderno).

Hofstede’s Cultural Dimensions were used to derive a working hypothesis and a starting point for the design of the program. A questionnaire focusing on the participants’ self-perception and self-efficacy was used to assess the personal development throughout the program. It helped to identify the key lessons learned for the participants.

The main learning aspects that were mentioned by the participants were:

The client is a global player in the field of refractories for the cement, the steel and the glass industry. The company has production sites all over the world, including Austria, Germany, France, Spain, Italy, United Kingdom, China, India, South Africa, Canada, Mexico and Chile. It has 8.000 employees worldwide (2008).

Architecture and design of program

Taking this context into account, the consultants decided to set up a group coaching program that consisted of 5 modules combining elements of group coaching and training.

Potential participants were nominated by their superiors and invited to join a day long Assessment Centre resulting in individual development reports and a Development Conference with their superiors. Subsequently 38 leaders and high potentials of the Mexican and Chilean sites were recognized to take part in the program. They were divided into three groups (one General Management and two Specialist groups) according to their previously assessed competences and potentials. Each of the groups was supported by a team of coaches consisting of one Austrian and one Mexican-German coach who was born and raised in Mexico but completed his studies in Germany and has since then been living in Berlin.

A good mixture of gender and nationality (Chileans, Mexicans and some European Ex-pats) was also taken into account. Each of the five modules had a duration of three days. The main topics were:

A central element of the program was the focus on self-reflection and feedback, giving the participants the opportunity to work on their presumptions and behavior as leaders. Elements of action learning (e.g. role- plays with subsequent feedback) supported this learning process importantly.

The whole program took place in Mexico, but was held mainly in English. This was a great stimulus for the participants to improve their own English language skills. It also supported the global orientation of the company and the fact of English being the company’s language. However role-plays were mainly done in Spanish. This allowed the participants to step more easily into the exercises.

The program closed with a final workshop in which the groups had the opportunity to assess their own progress both on an individual and on a group level.

Different approaches to leadership and feedback culture in Latin America as compared to Europe have been a characteristic feature of the program. Relating to Hofstede’s Cultural Dimensions differences occur in the ‘Uncertainty Avoidance Index’ which might indicate a more directive, instructive and risk adverse leadership style in Mexico and Chile compared to Austria and Germany in order to keep control and to eliminate the unexpected. In addition there is a higher Power Distance Index in Mexico compared to Austria which might indicate that followers in Mexico accept and even favor a strong and powerful (patriarchal) leading style as it matches their leading style prototype. They might see it as the most effective way to lead.

Although the program gave enough space for discussion and action learning, it was not that easy to evoke lively discussions on different leadership styles (directive vs. team-oriented). It seems as if at the beginning there was a lack of understanding and some resistance towards a different and unknown leadership style. Similarly giving and taking feedback (positive as well as critical) was considered by the participants at the start of the program to be rather unusual. The coaches managed to overcome this by introducing their tools and techniques slowly in a step-by-step fashion. A rather small number of core models was chosen, introduced and repeatedly touched and discussed throughout the different modules. In addition participants were encouraged to try out themselves and the presented techniques in the secure space of the group coaching. This helped the participants to become familiar with the different and mostly unfamiliar models and approaches.

Developmental aspects and progress of participants

The participants were asked to scale from 1 (very low) to 10 (very high) their individual progress / development in the program. They were asked to do it in a way to first mark with the letter A the level of knowledge / competence they think they had before the training program started (e.g. “Go back to the time of the Development Workshop”). Secondly to mark with a letter B the level of knowledge / competence they felt they had achieved at the end of the program. See the example: 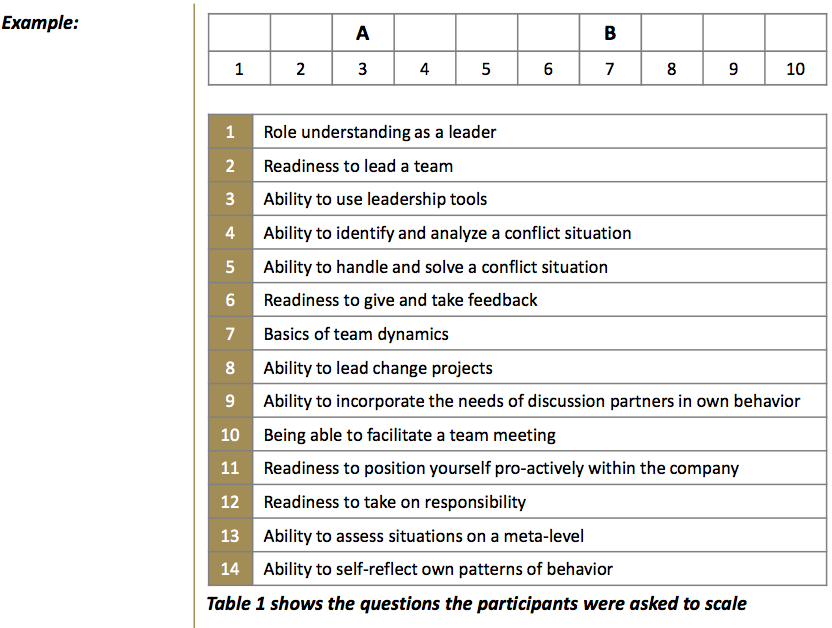 This approach is closely related to the psychological construct of self-efficacy developed by Albert Bandura in his social-cognitive theory of learning. Self- efficacy means a person’s belief about his or her ability and capacity to accomplish a task, to deal with a specific challenge or the challenges of life in general. It is thus related to own strengths and competencies. It does not necessarily mean that a particular tool or technique is used according to the state-of-the-art but rather that a person has a certain feeling and understanding that he or she can face a situation related to these tools and techniques. In interpreting the collected data the inter-relations between the answers to the different questions are thus more important than the actual scaling of each answer.

Figures 1 and 2 give an overview over these inter-relations. The results shown are based on the answers of the 13 members of the Generalist group. To allow for a more detailed analysis the Generalist group was divided into two sub- groups: A group of 9 participants who had leading experience (leaders) and a group with 4 participants who had no leading experience (non-leaders).

To begin with, figure 1 shows the progress or development the participants felt they had made during the program. Members of the sub-group of leaders felt that they had particularly made progress in (numbers in brackets indicate the actual figures):

The non-leaders ranked the following aspects as being their most important learning’s:

All participants considered two aspects (namely “Readiness to give and take feedback” and “Being able to facilitate a team meeting”) as very important for their development as leaders. Interestingly enough, the non-leaders considered two aspects (namely “Basics of team dynamics” and “Ability to incorporate the needs of discussions partners in own behavior”) as less important compared to the members of the leaders sub-group. This might reflect their actual situation of neither having to consider the dynamics of an own team nor account for any team members needs.

For the members of the sub-group of leaders the following aspects are ranked highest:

For the members of the sub-group of non-leaders the following aspects are ranked highest:

Discussion of the findings

The results of the questionnaire show that the intended goals of the program have been met successfully. It reveals that the leader sub-group integrated the lessons learned into their leading practice. It manifests that the most valued development steps were related to their professional and social competences. Both, the ability to use leadership tools and the ability to facilitate a meeting clearly focus on tools and techniques (professional competences). These results are not surprising as it was expected to a certain extent by the coaches.

The progress made by the participants concerning the ability of giving and taking feedback (social competence) explains the importance the coaches devoted to this topic.

Concerning the development of the participants’ leadership personality a considerable success was also achieved. Particularly because at the end of the program the members of the leaders sub-group felt much more likely to take over responsibility than they had done before entering the program. They seem to be strongly motivated and with a broader understanding of their leading role.

For the members of the non-leaders sub-group, the “Readiness to give and take feedback” and the “Ability to self-reflect own patterns of behavior” were the most important development aspects, showing also a strong commitment to take over more responsibility.

The presumptions derived from Hofstede’s Cultural Dimensions would point to a participant’s behavior that avoids taking over responsibility and that relies on a “boss who knows all and best”. In contrast, the results of the questionnaire indicated that the participants clearly oriented themselves towards taking over responsibility. They seemed to be ready to take on this challenge after having completed the program. This would mean that at the end of the program they had a broader understanding of leading and their own role as leaders. This is consistent with findings from Eric J. Romero who proposes two broad categories of leaders in Mexico: a more traditional leader who has stronger ties to the Hispanic culture (El Patrón) against a more modern leader (El Líder Moderno), who is much more oriented to the Anglo-Saxon culture. This means, that the program helped the participants to move from a more paternalistic stereotype of leading towards a more modern and globalized leadership orientation. Other work by Guillermo Velázquez Valadez proposes a specific leadership model “El líderazgo empático” for larger Mexican enterprises. This again explains the shifting leadership paradigms in Mexico.

The differences in the leadership role understanding (e.g. el Patrón versus el Líder Moderno) could have been discussed even in more detail throughout the program. This was also suggested on the 1st ESMT-Coaching Colloquium in Berlin, Germany, in December 2009, where the case was presented by one of the coaches (Gerhard Liska).

A stronger focus on how global developments interact with and influence local cultures could thus have supported the participants even more. This would mean to use diversity (here explicitly the different approaches to leadership) as a positive resource rather than to fight against it.

Nevertheless it is of equal importance to provide a set of tools and techniques for the participants to support their development. This could also be a key aspect to help the participants to make their way through the transition from a more locally oriented leadership approach to a more global oriented approach. Especially the results of the members of the sub-group of leaders underline this point as they value “Ability to use leadership tools” and “Ability to facilitate a team meeting” as major development steps. Both questions are strongly linked to tools and techniques of a more global oriented leading approach and point to the fact that incorporating the followers to a greater extent seemingly becomes more important.
For the members of the sub-group of non-leaders self-reflection in the sense of personal growth in general seems the most prominent aspect of such a leadership program.

This indicates that leaders and non-leaders might have different needs concerning a development program as the program implemented.

An extended and more detailed version of this case study has been submitted to the Elsevier journal Organizational Dynamics for publication.